I have been meaning to write this blogpost for a while and recently read a blog online that May is Cystic Fibrosis Awareness Month, so this couldn't be a more perfect time for my post.

One beautiful Oregon morning I walked to the beach from our home. I decided to count the steps from our backdoor to the first steps to the beach. 144 Steps. As I looked out towards the ocean, a little out of breath, I found myself thinking about those suffering with Cystic Fibrosis. How challenging would 144 steps be? I don't know much about the disease and have done research and will confess I still don't know much, but when someone you know has CF you want to educate yourself a little more and do what you can to help find the cure.

This is no ice bucket challenge and I don't expect this to go viral, what I am hoping is that you all will walk out your front door, count 144 steps and take a picture of what is in front of you. Post on Twitter with the hashtag #144Steps #CysticFibrosis, or on Facebook and then most importantly, if you are able to, make a donation to the Cystic Fibrosis Foundation. Every little bit helps. It takes a village remember? Click on this link > Cystic Fibrosis Foundation

I hope that you will share this with friends and family, we can make a difference.  And to one of the most amazing woman I know who exudes glitter and rainbows, this blog is for you.

Thank You Al Gore for my Friends. 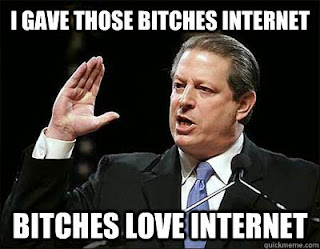 I remember when we first got dial up and how much excitement there was that we could connect to things and other people so quickly. The tone, the connection, the wait. Pandora's box had been opened and there was no going back.

It was through the internet in 1999 that I met my first online friends, Heidi and Renee. We all belonged to a South African chat forum and the three of us fast became friends, the three musketeers, the terrible trio. Together we have dealt with death, divorce, Hurricane Katrina, moves across country, graduations, weddings of children and so much more. In the 16 years we have known each other we have only physically met once. In 2012 Heidi decided that we were going to road trip to Napa and when Heidi puts her mind to something, nothing can change it, you all just nod, say yes and show up. Meeting Heidi and Renee for the very first time was very emotional. If there was a bond of friendship before, our meeting only solidified it.

November 2, 2009 I decided to enter the world of blogging, mainly as a creative online medium for my rants and thoughts. One of my very first followers, and blogs that I in turn followed, was a blog written by Brooke. Her husband was in the military and she had two little girls. The ultimate military wife. We would post comments on each others blogs and engage in small talk. Then along came Twitter and it was discovered that we both had a mutual friend in common. Life happened and Brooke and her two adorable girls moved back to Oregon. The very first time I met Brooke was a sleepover at my home. Do I need to say anymore? Brooke is my bestie, my go to person when I need an adjustment, a compassionate, but very level headed individual who brings calm to my life. Plus she likes loves wine.

Without Twitter and the internet I would never have met the fabulous Kramer crew and the wonderful world of their wine and sparkles. One tweet about having a sparkle party and I turned into that stray cat that one knows you shouldn't feed, but do. The Kramer crew would have to go into witness protection to get rid of me. Beyond blessed.

My Fuck It list includes meeting the following amazing people I have met via the internet and had interactions via Skype and on the phone, but yet to meet in person. I am blessed to know these very wise individuals who probably tolerate my neediness, but with kindness have never made me feel as though I was that needy person.

Mitchell from Mitchell is Moving
Linda from The Good, The Bad, The Worse
Megan - The Navy wife in Japan who no longer blogs, but is on FB and is just like me.
Alex from the very hot Arizona area. My biggest cheerleader.

So to Al Gore I wish to say thank you for bringing these wonderful people into my life. What would I have done without the internet? Probably found another way to stalk people I guess.