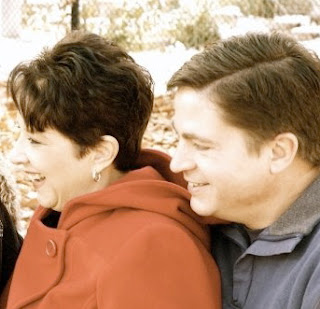 In 1999, while working on a military conference, I first met Bear.  I enjoyed speaking with him as he was not your typical Air Force guy.  He was quiet, well spoken, smart and devoted his life to his children.  Our very first conversation was this:

Me:  So are you married?

Bear:  Hell no, I am done with woman, not going to go down that path ever again.

I would see Bear at various conferences or when I was on the Air Force Base.  We always chatted and joked about many things.

Fast forward to 2004 and me going through my divorce.  I had asked a few people from Bear's old squadron whatever happened to him and was constantly told he was in a relationship.  I was a little disappointed, but I had lots of healing to do. I later found out that this was not the case, Bear and I both have a theory as to why I was told this.

28 May 2004 I was on base and who should walk through the door, Bear.  He didn't recognize me, divorce diet.  He gave me a hug and we chatted.

I gave him my phone number.

The rest is history.

Happy Anniversary to my best friend, my rock, my stability and snuggle buddy.

Free from the clouds by Darren Cockle

While on Twitter yesterday Darren Cockle posted a link to his latest blog post.  As I started reading his post I felt the heaviness of the past few weeks begin to lift and the clouds begin to move to allow the sunshine in.  Sometimes we all need to be reminded to free ourselves from the dark clouds.  I hope this post touches you as much as it did me. 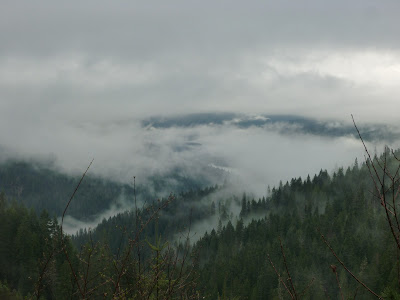 Free from the Clouds by Darren Cockle

I can only assume a similarity but grief is the closest I have ever been to the darkest clouds of depression. Being stuck inside your own head trying to make sense of your environment and your existence is debilitating for many on a daily basis.

The darkest clouds are the laziest clouds because of their density and therefore remain as still as the person that is consumed by them. Running is good therapy for depression because the clouds are left behind whereas the road ahead is visible. The natural release of endorphins is a factor too. Nobody likes living in a cloudy haze as the joys of our world pass by unnoticed and unappreciated.

Depression is as grey an area as the world is to those affected by it. There are many causes. Life and death is a simple answer for not wanting to get out of bed in the morning. Poverty, work, tiredness, loneliness, Eastenders, The Jeremy Kyle show and our many vices are factors that hinder our natural ability to function and smile. From a certain angle the world is a mess. Wars are taking place every day where families are being torn apart by death, torture and destruction. Famine and diseases are ending the lives of millions before they even reach adulthood.

I count my blessings that I didn’t give up on my family when our lives were changed forever by the onset of breast cancer and the loss of my wife and my children’s mum. I have learned a lot from my children and others that have dealt with loss. Children live in the moment and can smile in the midst of the biggest tragedy. They do shed many tears but rarely live in the past or hold onto bitter grudges. Children live how God intended them to with innocence and a love that is pure. Sadly, outside influences and prejudices change the path that could have been so simple and enlightening.

I was driving to my parents’ house one day and I took the same route as I always did. The ironic thing is that I could probably do it with my eyes closed. Many times I would daydream about my job, an argument or whether other people lived a more fulfilling life than mine. I was suddenly catapulted into the present and all that glittered was gold. It was autumn and I was passing through a tunnel that had been created by trees on either side. I smiled and every sense became alert to the heaven that I had failed to acknowledge previously. The sun was shining through the gaps between the leaves and a soulful song was bringing joy to my ears. I drove slowly and stared whilst taking mental photographs. I knew that the leaves were dying and would be part of the ground on my next passing. I also knew that the beauty would return again. If only our happiness could be as certain as the returning seasons that continue long after we become part of the ground.

Most of us have a choice regarding how we live our lives. In the clouds of depression, getting out of bed in the morning can be more difficult than making a good soufflé. I do think that attempting to make a soufflé would give more substance to your day and you’d be proud of your achievement.

Low self-worth and self-esteem stop us from living a complete life. The graveyard is full of buried treasure owing to a lack of self-belief. I will use my dad as an example. His father died just before he was born and he was raised without a male role model. He is a brilliant dad and is very talented. He excels in everything that he is interested in. Ten years ago he couldn’t switch a computer on. Today he is my first port of call when my computer has a virus or I want to throw it out of the window. I also contact him instead of a plumber, mechanic or an electrician. His biggest love is photography. He loves to capture the beauty of our world through his lens. He could have and still can make a career out of his passion but his lack of belief stops him from proceeding. He feels that only professional photographers can make a living with their cameras and to think differently is to live in a dream world. Belief and a bit of luck are often all that is needed for most success stories.

I always think of George Bailey (James Stewart) from one of my favourite films “It’s a Wonderful life”. George, like many before and after him, is depressed because his dreams have gone unfulfilled and all hope has gone. He suffers in silence and decides to end his own life. In a cloudy haze where all rationality is either lost or extremely hard to find he gets dangerously close to his last breath. An angel appears and the clouds lift as George is shown a different perspective regarding his existence. He sees what his world would have been like without him in it. The simple beauty of life was right on his doorstep. There was so much love and hope in his life which had been masked by internal clouds.

If you are feeling like the crumbling leaves in the gutter please don’t let yourself drown in the drain. Talk to your friends and family, get medical help, go running or make some bread. Life is better with you in it especially if you have children. It is extremely unfair to expect the souls of those left behind to deal with a child calling your name at bedtime whilst they are suffering from their own loss and guilt.

Fight to live in the present and don’t spend too much time in the past or an unknown negative future. Just like the golden leaves that turn to dust. Beauty will return because the good life is out there somewhere, waiting for your smile as you emerge from the clouds.

You can follow Darren Cockle by clicking on this link.

Proud doesn't even begin to cover how I feel.

Today I went to the Oregon State University Administration building to pick up Bear's diplomas. 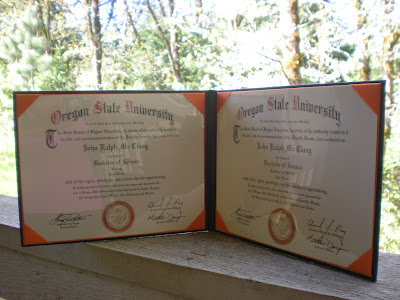 Bear graduated with the following:

I am beyond proud.  If anyone was to ask me who my hero is. The answer is clear.